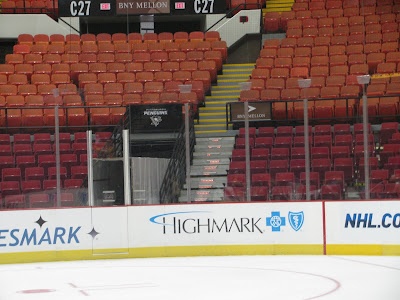 Our seats fromt the ice! 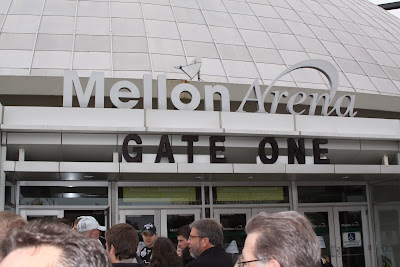 The entrance to the grand old barn! 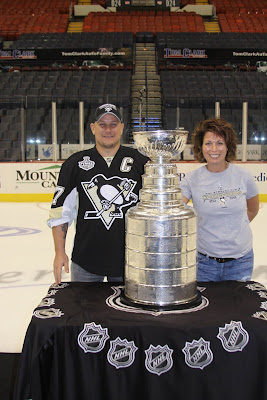 We get to meet Stanley 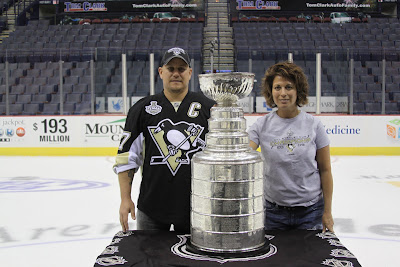 I am not supposed to touch shiny objects, but I could not resist in this case! The two or three of you read this blather regularly know that I am usuallly VERY positive relative to my feelings about the Penguins organization and how they handle things......Not this time guys......though I wound up having a nice time standing in line for four plus hours with my lovely bride, I in no way intended to give up my whole DAY for this event. In a two day supposed thank you for season ticket holders, the Pens decided to allow them a ticket per season ticket for a photo opp with Lord Stanleys cup. They divided the group into Saturday and Sunday and gave you a two hour window based on your initials to show up for the picture.......Well, Saturday turned into a 4-6 hour wait as apparently some of my fellow season ticket holders think it is okay to include their entire family in the event, and the staff at Mellon Arena seems to be incapable of enforcing rules, which turned Saturday into a clusterf**K. Hearing this, and having a slot between 8 and 10 am Sunday, for those season ticket holders with the last name starting in Ma to Mo, my wife and left at 8:15 for our trip to the arena. As we arrive at 8:45 there is a line that comes out of the entrance and runs about 100 yards down the street......did not look too bad right? No! We waited four hours and fifteen minutes as every asshole with a ticket or a relative with a ticket decided to come down between 8 and 9, regardless of when they were supposed to come.........there are not as many people in PA with the first letters to their last name Ma to Mo as there were in front of us. Again, why have the rules if you allow anyone in at any time regardless? Anyway, to you yinzer fools who were in front of us this am whose last name did not start in Ma to Mo, please know that I would not waste a drop of urine to put out the flames should you or a family member catch fire! To the concessionaire who tried to sell me beer that was so skunked it smelled like vinegar, I might waste the urine, but not much else! To the annoying family that included the woman whose derriere caused me to worry about whether the ice was thick enough, see my first statement and hope there is no gas within my reach! Despite this, my wife and I had some laughs and got some interesting perspective as to the size of the ice, and the micorscope the players must feel they under during a game........