We were allowed to spend the money, we always tried to win,” Clarke said. “We didn’t do what Pittsburgh did; lose seven years in a row so they could get good. They did it twice, in fact. They went through six or seven different owners. We’ve had one owner.”Clarke finds the strategies of some current teams appalling when considering the way other organizations have built competitive teams.“It’s somewhat embarrassing that three of the last teams (in the 2009 playoffs) missed the playoffs six or seven years in a row; Washington, Chicago, and Pittsburgh,” he said. “Now they’re good and the teams that try to win all the time get penalized. Our philosophy has never changed since 1967.”Although Clarke was never able to capture a Stanley Cup in the front office, it wasn’t for lack of effort or desire.“We do everything we can to win; it is our responsibility to our fans.”

Clarke fails to mention all of the bad trades he authored, or the long term overpriced contracts of Hartnell and Little Danielle Briere that hurt the Flyers ability to add the final pieces of the championship puzzle.......Sounds to me like a man who cannot climb to the top of the mountain looking for excuses!
Posted by Unknown at 5:23 PM No comments:

Posted by Unknown at 7:34 PM No comments:

Listen to the commentators talk about McKee's game that night.
Posted by Unknown at 5:48 PM No comments:

Our new defenseman blocks shots, checks hard and will go with even the tough guys in the league.
Posted by Unknown at 5:45 PM No comments: 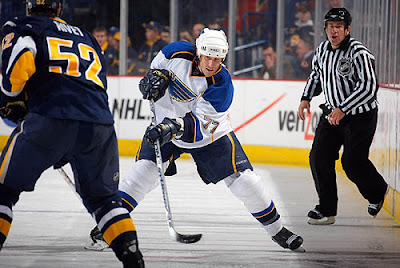 McKee, 31, is not coming here for his offensive abilities. He had eight points (one goal, seven assists) in 69 games last season with St. Louis. He's never scored more than five goals in a season and his career-high in points is 17.
His games is defense. He was seventh in the NHL last season in blocked shots with 185. For the sake of perspective, Rob Scuderi led the Penguins last season with 164. He has finished in the top ten in three of the past four seasons. In 2005-06, his final season in Buffalo, he led the league with 241. McKee plays a rugged, hard hitting game, similar to Brooks Orpik. At about 6'4" and 204 lbs he should add the right mix we need to replace the departed Gill and Scuderi.......he hit harder than both, and as stated, he blocks as many shots, or more, than Scuds did! He came at a great price, one year and $800,000, which should leave the Pens room to make a move on a solid backup goaltender.........the one issue with McKee is durability.......he is oft injured, due in part to the way he plays the game.......if he can stay healthy, he is exactly the kind of guy they needed.......Oh yeah, he doesn't mind dropping the gloves either. All in all, a very solid Shero-like signing.
Posted by Unknown at 5:32 PM No comments:

Congrats and best wishes to Scuds! I remember watching Scuds and Melichar two or three years ago and wondering what we had to do to get NHL caliber defenseman on the team! Well, we thankfully gave up on Melichar, and Scuds blossomed over the past two years into a really good shutdown defenseman, as steady as they come. Scuds, we are glad you were able to cash in 13 M plus over the next four years is not chump change, so enjoy it! You turned the past two years into a real payday and you deserve it. That said, the Pens made the right choice drawing the line at about 2M per year. Now they need to find another good stay at home D man, Beauchamin I hope, and a good back up goalie, Weekes I hope. Finally, get Fedotenkos deal done or pursue Kotalik................the next couple of days should tell a lot about what our 2009-10 Pens roster will look like. In Shero we trust.
Posted by Unknown at 12:17 AM No comments: