Greed, Arrogance and Stupidity aka NHL 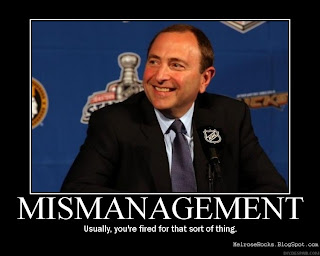 
Since writing this post originally, I found an NHL press release with the following statistics relative to revenues created through concessions and apparel sales in North America.  Consumer Products were up 15%, Jersey sales were up 25%, Lifestyle Apparel sales up 35%, Children's Apparel sales up 14%, Headwear sales were up 41%, NHL store sales were up 27%, NHL.com sales were up 20%,  and Team Concessions were up 13% across the board.  Again, it is really tough to have much sympathy for the position being taken by the owners in this scenario.
Posted by Unknown at 3:55 PM No comments: